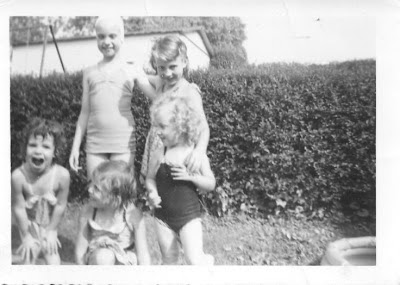 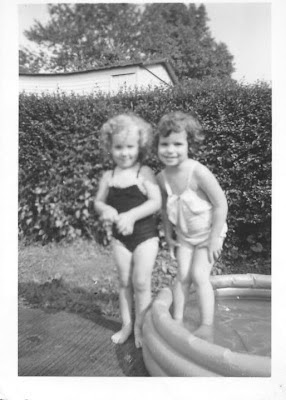 I've gotta wonder why Florence was wearing the bathing cap.. that pool can't be more than 4 inches deep... but on those hot August days in Pittsburgh, anything wet was a blessed relief.

Janet Whitfield and I in her back yard in 1955

Shortly after this photo was taken, Janet and Carol (and their sister Judy) moved to San Diego. I imagined them going to Disneyland every day after school. I hadn't seen or heard from them since then, but on a lark, looked up Whitfield in the San Diego phone book while I was out doing BURIED.

To my amazement, the J Whitfield in the phone book was my friend Janet. She, Carol and I had dinner that evening (although none of us remembered to take a camera!)

I went home from San Diego and found these photos. ahhhhh... memories.